The “Heaven’s Net” design represents the righteous struggle between two parties in a court case.

With its competition entries, Inros Lackner Vietnam took a modern approach in developing a contemporary working environment for 600 judges and employees, with the open design of the 30 courtrooms symbolising transparency. The design team was inspired by the award-winning film “Heaven’s Net” by the director Phi Tien Son, and the design bears the same name, representing a net that also exists in a judicial context. The main complex consists of two blocks – the court building and the administration building. The two buildings are pressed into each other as if engaged in a conflict. Considering also the façade concept, “Heaven’s Net” is intended to represent the righteous struggle between two parties in a court case.

The design places much value on aesthetics – on the one hand in order to create an iconic urban design, and on the other, with its expansive façade and powerful structure, to give an impression of strength and stability. A key element of the design is the layout of internal corridors, which are designed in two separate rings to ensure that the paths of judges and court-case participants do not cross. 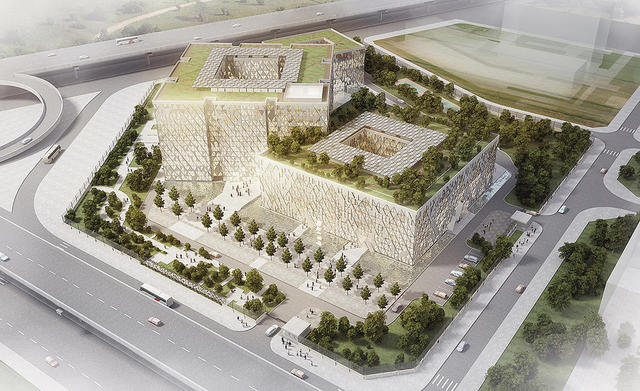